I am just beginning to explore astro-imaging, and just beginning to produce first images that are not complete disasters. This is hard! I’ll organize more of an album, and compose an “all the mistakes I made” journal, when winter sets in. For now, a few images as I start to progress.

Same Saturn image as above,

but re-processed from the original image stream after spending several weeks reading books and tutorials on Registax. Better aligning, stacking, and wavelet enhancement. I think this is pretty amazing considering it is the same data as the image above. 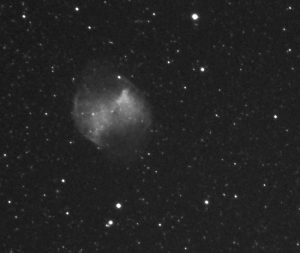 I actually spent the evening capturing data to analyse and tune periodic error in the mount but then did a “what the heck” capture of M27, just to see. This is a single 30-second exposure, unguided, no PEC.

I’m forcing myself to stay with monochrome for deep-sky imaging until I am comfortable I have it mastered, then I’ll add colour processing.

This was a test shot after an evening of practicing drift alignment. Clouds were rolling in and there was a full moon, so conditions were poor. PEC not trained and no guiding, so exposures were short. This is 10 30-second subs, stacked with Maxim DL 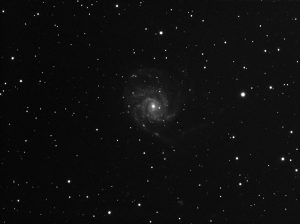 I haven’t learned to work out North/East orientation of images yet. Note two small galaxies appear below M101 – I think the larger is NGC5477, 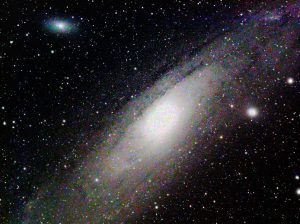 Not at all pleased with the colour – this was my first real attempt at filters, and there are problems here with exposure balance, alignment, etc. But I was so thrilled to see anything like this that, for me, it’s a keeper anyway. 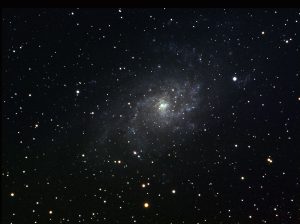 First reasonably successful LRGB image via filters, with guider running.  Guiding is still a bit erratic – need to tune backlash settings for mount better. However, it held steady for the 5-minute subs in this image. Would have liked to add more light, but everything frosted over at about 11:30 PM. 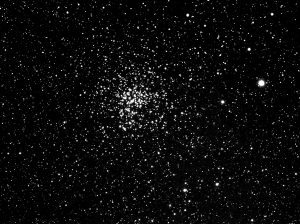 A test image after moving the mount to a permanent pier, this M37 worked out nicely. I like this cluster, with it’s large dense centre and busy background of stars.  I’m looking forward to doing another one in colour. 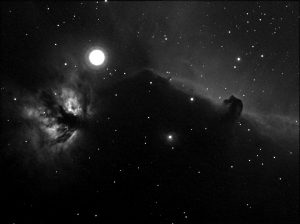 This image of IC434, Barnard 33 (the Horse Head Nebula), and NGC2024 (the Flame Nebula) is the start of a larger project. This monochrome image was taken in Hydrogen Alpha light during a nearly full moon (H-Alpha is essentially immune to moon light pollution). Colour will be added later when more imaging time presents itself.

SXV-H9 camera with Astronomik H-Alpha filter, on SV80S refractor, on pier-mounted Losmandy G11 mount, guided by SXV guider on a Pronto. 2.77 arc-seconds per pixel resolution. This is an uncropped full frame, binned 1×1. 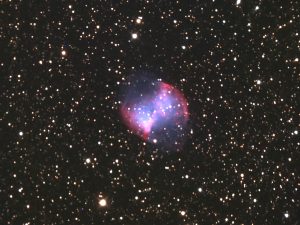 100 minutes in 10-minute subframes with ST-2000XCM camera on an AT8RC Ritchey-Chrétien with 0.75x reducer, autoguided on a Losmandy G11 mount. 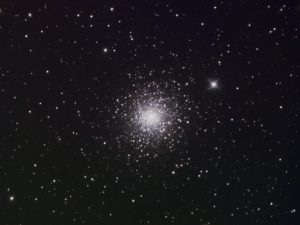 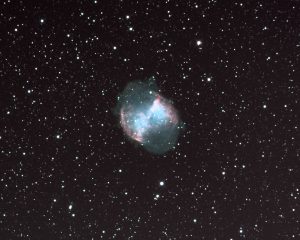 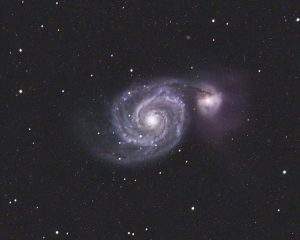 First draft of colour (LRGB) combination after a month of data acquisition.  90 minutes of Luminance, and 90 each of Red, Green, and Blue binned 2×2. QSI583 camera on an AT8RC, autoguided with a Lodestar, all on a Losmandy G11. 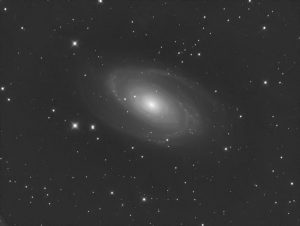 A test image after some gear adjustment. 30 minutes total monochrome, as 6 5-minute exposures. QSI583 camera on AT8RC, on Paramount MX, autoguided with Lodestar.

I’m not keeping this gallery very up to date, as images are published more frequently on my observatory’s web site. See that site’s Gallery for more.

All images here, and the larger ones they link to, are Copyright © Richard McDonald, with dates given in the descriptions.

This site uses Akismet to reduce spam. Learn how your comment data is processed.