Valve clearance adjustment is required at regular intervals. My manual specifies checking every 10,000 Km6,000 Miles. For me, checking and, when necessary, adjusting is the most technically challenging thing I’ve done. For that same reason, it’s the most satisfying, and the most money-saving.

This job takes a long time — allow 4 to 8 hours, with a trip to the shop at the halfway point.

Perhaps that needs clarification. This job took me 4 to 8 hours and, if you have never done this kind of thing before, it will probably take you that long. Maybe a little less, because I was pausing to take pictures. No doubt experienced mechanics can do it in a hour, with one hand, while grooming their dog with the other.

Some difficulties could be:

Unfortunately the time I took these photos the valves were in-spec, so no adjustment was required, so this article only covers checking the clearances, not adjusting them. Next time I will probably have to adjust, will take photos, and will fill out that part of the procedure. Meanwhile, there is a reference below to the adjustment procedure for another bike.

Putting the bike on a rear stand makes this job much easier by levelling the bike and holding it steady.

Since this job involves removing a lot of small parts, I like to have a divided parts box on hand, and place the parts in it, in order, as they come off. The 6 screws involved in removing the seat go in the first compartment, then the 4 for the gas tank go in the second compartment, etc.

This makes it far easier to ensure that all the parts go back where they belong and in the right order.

With the gas tank removed, you can see the top of the engine. The top cover, above the black gasket, has to be removed. It is held in place by 4 bolts that are easy to remove, but the challenge is getting the cover lifted off with the small amount of room that is in there under the bike frame. So we need to spend some time clearing obstacles out of the way. 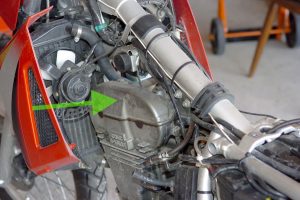 Here’s the cover from the other side. Again, you can see several other bike parts that will be in the way.

First we’ll remove the cooling fan from the back of the radiator, since its motor housing is in the way.

Remove the electrical connection from the bottom of the radiator.

To free up the wires to the fan itself, bend open two small soft metal clips that hold the wire bundles.

Notice that one of the bolts has a ground wire with an eye attached to the bolt. Remember this wire when re-assembling later. 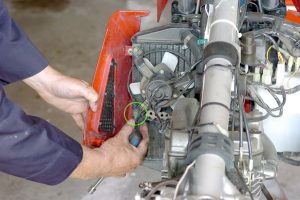 Just hang the fan over the top of the front fairing, out of the way.

The gas tank was sitting on two thick rubber disks, one on each side of the frame. Pull these off and set them aside.

The wires to the spark plug and temperature sensor, visible from the right hand side of the bike, are in the way. 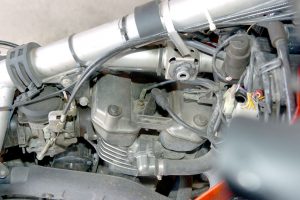 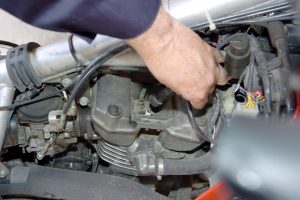 And remove the thin wire leading to the temperature sensor by pulling the connector off the lug.

You do not need to remove the spark plug itself — leave it seated in the engine.

Clean the accumulated debris off the valve cover so it doesn’t fall into the engine when you open it.

Remove the 4 cover mounting bolts and set them aside.

Just above the cover on the right hand side, there is a black plastic connector block of some kind (whose function I do not know) connected to the frame. That’s in the way too, so remove the single mounting bolt and move it aside. 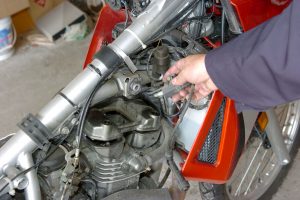 Tug up on the valve cover and it will break free of the gasket seal. 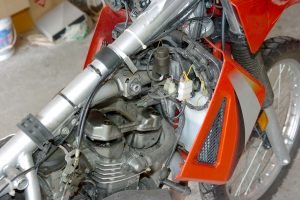 Do this on both sides, so the valve cover is loose. 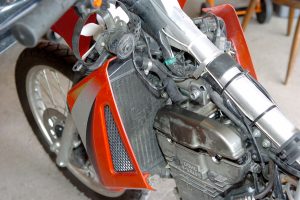 You will be sure it doesn’t fit and you’ll need to struggle with various angles for a while. Pressing the nearby radiator hose out of the way may help. 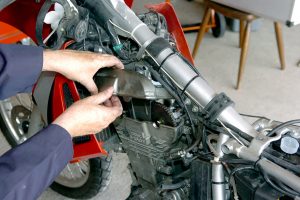 Suddenly, all the angles line up and it will slip free like it was never a problem. 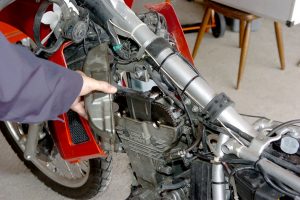 Locate the rubber gasket — it may be stuck to the cover or to the engine — and carefully remove it.

If it is undamaged, you can carefully clean the old silicon off it and use it again. If it is broken or torn you will have to replace it.

For your first time doing this job, you may prefer the confidence of spending the $10 and putting in a new one. (I keep a new one on hand just in case, but haven’t had to use it.) 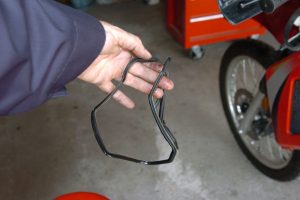 Here is the left-side view of the engine with the valve cover removed.

And the right-side view. 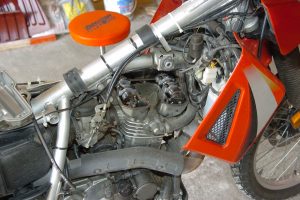 Standing on the right side of the bike, look into the engine. You can see 4 pear-shaped cams of highly polished metal. Each one presses down on a shim, and on a valve, or releases it, as the cam shaft rotates. The shims are the dull gray disks the size of a Canadian Loonie immediately under the cams. There is one visible under the bottom left cam in this photo.

The two cams toward the rear of the bike (on the left in this photo) are over the intake valves, while the two toward the front are for the exhaust valves.

You will be measuring the clearance between each cam and the shim underneath it.

The cams need to be in specific rotation positions for this measurement. In this photo they are pointing in various random directions, whereever the last use of the engine happened to leave them. This won’t do. Next we will rotate the engine and the cams to exactly the right position for measurement. 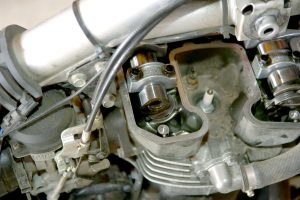 On the left side of the bike, locate the large roundish cover with two slotted plastic plugs in it (circled in green here).

The upper one (circled in red here) reveals a rotating disk with some reference marks, called timing marks, engraved on it.

The lower one (circled in green here) reveals a large hex bolt head that can be used to rotate the engine counterclockwise.

Fit a socket to the rotation bolt and gently rotate the engine counter-clockwise while looking through the inspection window.

Only turn the engine counter-clockwise. If you overshoot a timing mark, go around another time, don’t try to back up.

You will see various engraved marks go by. Stop when a line, and the letter “T”, lying on its side, are centred in the window. Click the photo to the right for a large version to see what this looks like.

The “T” is for “Top Dead Centre” and indicates the piston is at the exact top of the engine. This also means all the valves will be fully open, which is what we want. 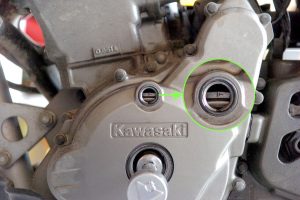 Unfortunately, there are two “top dead centre” positions, and some confusion in the documentation I’ve found about which is appropriate. I believe the one in this photo is the one we want. Note that all 4 cams are pointed “out”, away from the centre of the engine. 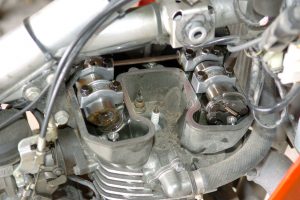 This is the other setting, with the cam lobes all pointing “in”. This is not the position called for in the manuals — you want the “pointing out” one above. (I suspect that it doesn’t matter, as long as the cams are milled symmetrically, which they should be.

Here are the cams on the exhaust side, toward the front of the bike.

And here are the cams on the intake side, toward the rear of the bike.

Unfortunately, my photo of the actual measurement of clearances was spoiled by carelessness. Next time I do this I’ll fill in this photo. Sorry about that.

But what you do is measure the clearance between each cam and the shim underneath it by sliding various sizes of feeler gauges into the gap, looking for one that fits with some resistance.

Here is a photo of doing this on a different bike (a ZX-6R).

It’s easier on the KLR because there is much more space to work in. 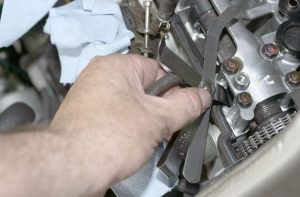 Check all 4 valves (2 intake, 2 exhaust) and write down the clearances, carefully recording which one went with which valve. Here is the table I wrote down doing this check just now.

The manual says that the clearances should be 0.10 to 0.20 mm on the intake side and 0.15 to 0.25 mm on the exhaust side, so the numbers measured here are in spec — no adjustment is required.

If any adjustment was necessary, we would do it here.

Next time I do this service I expect I’ll have to do adjustment, and will document it here. Briefly, the steps are:

It’s not hard, although it takes a bit of time, and the re-installation and re-synchronization of the cam chain can be a little intimidating until you have done it once.

For now,  here is a link to doing this procedure on a different bike (harder) just to give the general idea.

Having checked, and possibly adjusted, the valve clearances, we now need to reassemble the valve cover.Using a fingernail or a soft tool like a piece of plastic or a popsicle stick, carefully clean off any old silicon sealant that may be stuck to the rim around the engine casing. Also wipe away any oil or grit, leaving a clean flat surface.

Lay the valve cover gasket down and put a thin layer of RTV silicone sealant all around the surface that will face down, with a little more sealant and a little more attention around the two “half moon” shaped bumps on the gasket (circled in green here).

Carefully install the gasket on the engine head, making sure it is perfectly lined up with the edges all around, and pressing gently down so the sealant grabs hold. Make especially sure that the sealant has sealed the half-moons into the half-moon-shaped depressions in the head.

If possible, take a break for a few minutes to give the adhesive time to grab hold.

Reversing the removal process, struggle with the cover until you get it back in under the bike. This time you have the extra challenge of being careful not to dislodge the gasket. 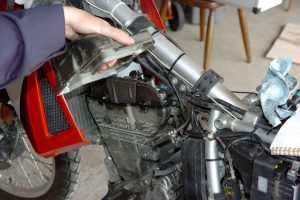 Slowly and gently press the cover down all around, ensuring that the gasket doesn’t slip out of position, and that the ridge on the gasket mates with the groove in the cover.

You might not have noticed, when you removed them, that they are not all the same. Two are longer.

The shorter two go on the left side, adjacent to the raised part of the cover where the cam chain is.

Put the bolts in place and snug them up, then use a torque wrench to bring them to the specified torque.

My manual calls for 8 Newton-Metres71 inch-pounds. That’s not very tight — if you’re doing this by hand without a torque wrench (which you should not be) it’s just a bit more than snug with a socket wrench.

That’s it. The rest of the reassembly is just a careful reversal of the disassembly steps: put all the bits back in place around the engine head, then reinstall the gas tank, seat, and fairings.

(While you still have the gas tank off would be a great time to remove and service the spark plug, if that is on your to-do list.)

As soon as possible, test-run the engine and carefully check for oil leaks around the valve cover gasket. The most common problem with this procedure is that if the gasket is not installed flat and clean and well-aligned, oil will leak out around it. It’s not subtle — if you have it wrong you’ll know quickly because the oil will trickle over the hot exhaust header and smoke.

That was a pleasant afternoon, and a saving of a couple of hundred dollars. Thanks for following along with me.

Back to KLR-650
Back to Motorcycling

This site uses Akismet to reduce spam. Learn how your comment data is processed.